Parents to Baby Shane Michael Haley, who was born with anencephaly, he is fondly known as the Bucket List Baby 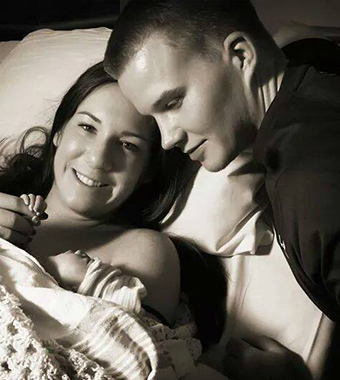 Parents to Baby Shane Michael Haley, who was born with anencephaly, he is fondly known as the Bucket List Baby

Jenna Gassew and Dan Haley were born and raised in Delaware County, Pennsylvania. They both graduated from Archbishop Prendergast and Monsignor Bonner High School where they were student-athletes. In 2014, Jenna earned a degree in Mathematics from Rosemont College, while Dan is currently studying Business at Villanova University.”

On April 10, 2014, Jenna and Dan learned that the baby they were expecting had a terminal neural tube birth defect called Anencephaly. They named their baby boy Shane Michael and decided that, although the diagnosis was dire, they would celebrate his life while he was with them in the womb. They created a bucket list of places they wanted to take Shane and in the following months traveled to New York City, Ocean City, Maryland, and the Cape May County Zoo in New Jersey, the Stroudsburg Train in Lancaster, Pennsylvania, the Philadelphia Zoo, and Linvilla Orchards in Aston, Pennsylvania.

Together as a family they rooted for their hometown Philadelphia Phillies and Philadelphia Flyers. They created a facebook page called Prayers for Shane so family and friends could follow their journey together as a family. The page soon went viral and was followed by nearly one million people worldwide. On October 10, 2014, at 2:25AM, their beautiful son, Shane Michael Haley, was born. He met his entire family of Aunts, Uncles, Grandparents, and Great-Grandparents and was baptized. Nearly four hours after his birth, Shane passed away peacefully in his mother’s arms.

Making memories; Preparing for the arrival of your baby with anencephaly

Dan and Jenna’s Presentation at the Conference

Listen to Dan and Jenna with Colette Fitzpatrick on Newstalk

Any cookies that may not be particularly necessary for the website to function and is used specifically to collect user personal data via analytics, ads, other embedded contents are termed as non-necessary cookies. It is mandatory to procure user consent prior to running these cookies on your website.